skip to main | skip to sidebar

I am currently reading an excellent book called "Killing Yourself to Live" where author Chuck Klosterman visits the sites of many famous rocknroll deaths including Elvis, Lynyrd Skynrd and Kurt Cobain. Klosterman is one of my favorite writers and all of his pieces for Spin are worth checking out.

As I spend my days building machines that can describe music, Klosterman's exposition on the meaninglessness of rock genres struck a chord with me. Researchers spend many hours and write many papers trying to classify genre, yet often most human listeners don't even understand these arbitrary terms. As a rock journalist, it's Chuck's job to help clear up this confusion! Here are a few examples of his wisdom:

SHOEGAZE: Music by artists who stare at their feet while performing—presumably because they are ashamed to be playing such shambolic music to an audience of weirdos.

IDM: This is an acronym for “Intelligent Dance Music.” Really. No, really. I’m serious. This is what they call it. Really.

So, even if your classifier can't tell "post rock" from "prog rock", now at least you have no excuse!
Posted by Luke at 3:37 PM 2 comments:

On November 5th, 2009, I achieved every nerd's dream when a story about my research on music analysis, iTunes' Genius feature and my music game Herd It was featured on Slashdot, spending over 24 hours on the front page! Better than a Ph.D, a love of Unix or a lifetime pass to the Star Trek convention, this certifies me as a complete geek. w00t!

Of course, the best result from all this was that we got lots of traffic to Herd It and collected some great data. Many sites have talked about the surge in traffic - and website crashes - that results from being Slashdotted but Herd It fared pretty well, once I suspended the huge, inefficient MySQL query I use to calculate scoreboards. Alas, all these new users were fleeting... such is life. Looking at Herd It's Google Analytics, there was a big bump on days 1 and 2 (while we were on the homepage) which dropped of steadily over the subsequent week until we were back to just about our original level. This must be a phenomenon that is seen with many one-shot promotions (news stories, price drops, superbowl ads) and inspired me to coin the term "The Slashdot Shark".

Without warning, a huge fin rises from the depths, strikes and then disappears, leaving carnage and destruction in its wake!
Posted by Luke at 10:54 AM 3 comments:

Today was my 8th Thanksgiving in America. Far out.

Today also marked my 4th or 5th turkey cooking. I synthesized the recipe from various websites as well as my own growing experience. Every year, everyone invariably tells me that the dinner was delicious but today was the first time that I was personally really happy with how the turkey turned out. Here's how I did it...

Step 1 - Brine the bird.
Something I'd heard about but never tried. Apparently, bringing the bird releases more juices and moistens the meat, avoiding the pitfalls of over cooking and enabling a nice, slow roast.
I prepared a solution of salt, brown sugar, ginger, pepper and spices, dissolved and boiled in about 2 gallons of water. It was a challenge to come up with a suitable receptacle in which to marinate the 17lb turkey in all this flavorful goodness. A water jug was too small, a bath tub was too big and our mop bucket was too gross. The eureka moment came when I realized that the vegetable crisper in the fridge was perfect:
1) It holds about 5 gallons of volume (liquid + avian),
2) It is readily refrigerated,
3) It is easy to remove and transport. 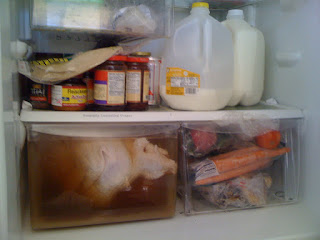 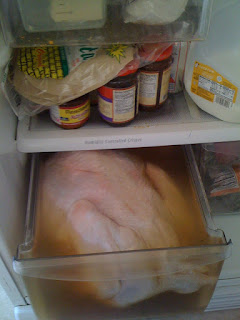 Step 2 - Stuff and butter
I fried 2 large onions, 2 apples and assorted spices and herbs until golden and aromatic. I mixed this with butter and breadcrumbs and mashed it into the bird's neck and body cavities, being careful not to over-stuff. Finally, I rubbed the outside of the bird with butter, propped it up on a few half limes and stuck it in the oven at 500degF 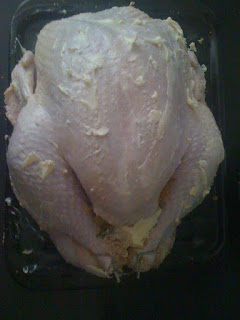 Step 3 - Golden tent
After 20 minutes of butter-burning, skin-browning roasting, I took the turkey camping. I wrapped it in foil to stop further browning and dropped the temp to 335F (the recipes I had read mostly said 325 but a few said 350, so I split the difference).

Step 4 - Fixins
With help from many friends, we prepared lashings of roast spuds, butternut squash puree, cranberry sauce, bruschetta, spinach-filo wraps, fresh-baked bread, and my mum's world-championship winning cheese cauliflower. I made gravy from the turkey drippings combined with turkey stock I'd made the day before from the giblets:
best. gravy . ever. 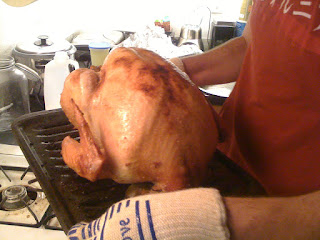 Step 5 - 4 hours later...
After much wine, appetizers and New Super Mario Bros. Wii, it was time to eat. I took off the foil tent to let the skin brown for 20 minutes more and then let bird sit for another 20 mins. Once our mouths were sufficiently drooling, I carved the clear-juiced but still moist turkey.
Quote of the meal: "Turkeys are bigger than chickens..." 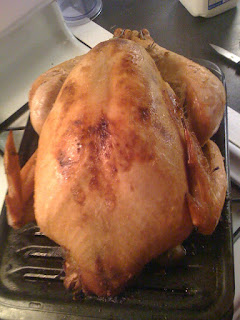 Step 6 - Post-prandial paralysis.
Tryptophan coma combined with not one, not two, but three deserts (pumpkin pie, blueberry grunt and tiramisu) left most of us on the couch for the next few hours. 12-year old scotch, capitalist calculations and Wii Sports kept us alive but mostly I was just thankful for my functioning digestive system.

Step 7 - Turkey sandwiches.
I'd say we ate about 35% of the bird tonight. Who likes mayonnaise?
nom nom nom
Posted by Luke at 2:08 AM 3 comments:

My office, the official HQ of the UCSD Computer Audition Lab, is full of servers, monitors and academic papers. But it was decidedly lacking in cool musical and electrical devices necessary for a real "laboratory". All that changed last month when I finally fixed my Paia Theremax theremin and Brian setup his old Paia 4700 analog synth. 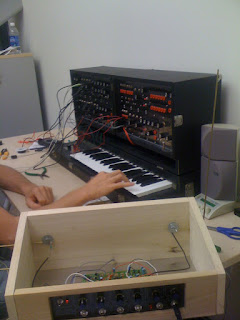 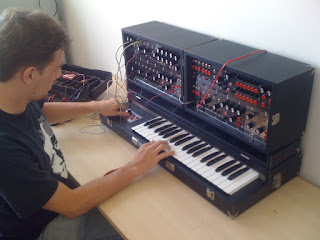 We've been making some pretty crazy sounds (I hooked the theremin output to the synth's filter for some awesome effects) and finally, we've got a lab worthy of the mad science we do! The guys in the office next door aren't quite so excited...

Most bands are used to getting their reference tuning from the piano / keyboard player. But one of the trickiest tasks was tuning the keyboard: 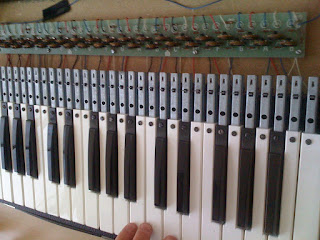 Adjusting a potentiometer behind each key changes it's output voltage and thus its pitch. Of course, then you still have to tune the oscillators... I don't know how anyone ever performed with these things.
Posted by Luke at 5:04 PM No comments:

I posted recently that Google's Music search has launched. Unlike most Google products (search, GMail, Maps, and, eh, Wave?), it's kind of underwhelming. You type in the name of a song or an artist and you get to listen to the song.
Once.
Maybe - sometimes you only get a 30 sec clip.

I can get 30 second clips (of more songs) on iTunes.
I can get full songs on LaLa, GrooveShark, Rhapsody/iLike.
I can listen to as often as I want on YouTube, TubeRadio, blip.fm and Spotify (if I live in Europe or am a hacker).
I can even download them (in case you didn't know) on BeeMP3, MP3Raid, BitTorrent, LimeWire, Gnutella, eMule, etc. etc. etc.

And I'm not the first to complain about this watered down, industry serving jive.

So what's the big deal?

I would say that Google's music offering in the US is music search - if you know what you're looking for, Google will help you listen to or (they hope) buy it in a nice, familiar gInterface.
What I'd like to see - and what Google have launched in China to compete with search leader Baidu - is music discovery. I want to be able to search for "funky bluegrass that will get my hoedown party going" or "mellow romantic tunes that will get this girl to fall in love / go to bed with me". Google can't do that.

-- "Where can one search for music with words", I hear you ask?
-- Why, Herd It's music discovery engine of course!
I've built a music search engine where you can find any music, even unknown, MySpace, long-tail, no-hopes, by using words to describe what you want to hear. It's going to change the way people discover music. The discovery engine is in Beta testing right now so sign up to check it out. Or, to get a taste of what we're up to, you can try the fabulous Herd It color search demo - it's magically musicalicous!
Posted by Luke at 12:09 AM 2 comments:

Google for Music... by Google?

The big goal of my research for the past few years has been to build a system that we liken to "Google for Music". Using signal processing and machine learning to analyze music, we can automatically associate any songs with hundreds of descriptive tags. This means that you can find music without knowing the name of the band / song / album you want - just by typing in words that describe what you want to hear. To check out a prototype of our system, go to HerdIt.org and sign up to be a Beta tester. While you're there, play Herd It and make the search engine even smarter!

Now it seems that Google is finally getting on board with this themselves. After years of staying away from music (the legal, licensing and logistical difficulties scared even them), it seems like Google music may be coming soon.

Now, all we need to do is get them to use our algorithms to make their search even better!
Posted by Luke at 12:41 PM 2 comments:

Modelling Music as a Dynamic Texture

My paper "Modeling Music as a Dynamic Texture" has been accepted for publication in IEEE Transactions on Audio, Speech and Language Processing! This is work with my colleague and good buddy, Prof. Antoni Chan, and my advisor and good buddy, Prof. Gert Lanckriet and is awesome for at least 5 reasons:Lookout for the paper in a library near you before the end of the year! We're working on extending the model to more Music Information Retrieval tasks like tagging and similarity. In the meantime, check out some of our results on automatically segmenting music. 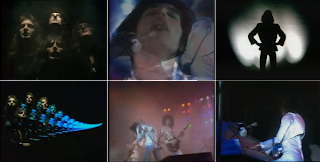 Listen to the 35-second version of Bohemian Rhapsody!
Posted by Luke at 1:08 AM No comments: